[:it]This month we were participating at the theater project in Armenia. It was my first experience to participate in performance. I was playing the role of father of the family. We were laughing for tears during preparation. My wife was a guy from Greece, it was very funny. We knew a lot about types of the performance/theater, about structure of theater and we got practice. There were 7 people from Russia and they broke stereotype that Russian people are closed persons)))) this guy are working in theater and they are very open minded, funny and crazy guys))) When I arrived to Armenia I felt I arrived to Russia, but not to Russia. Mixed feelings. 80% of the population of Armenia speak Russian, but on the streets 80% speak Armenian, but if I ask something in Russian, they start to speak Russian. I felt myself a little bit at home. But in 4 days of the project I started to miss Italy))))))))) I was enjoying the food, because it’s very close to Russian food. I ate aaaaall they were cooking for us.

We saw the mountain Ararat – incredible view!!! Although now Ararat belongs to Turkey, every Armenian, no matter where he/she lives now and where he/she was born, wants to see Ararat, to be there. Ararat is the father of the Armenian people. Ararat is genuinely loved by Armenians and is depicted on the arms of the country. This is the mountain to which, according to the Bible, Noah moored his ark and began a new life of mankind and all animals after the great flood. The view of Ararat brings peace to any Armenian, to see Ararat means to feel that you are home.

I knew a lot about Greece and Armenian cultures! About the food, traditions, dances, people. But at our trip to Italy something bad happened!!! Our airplane couldn’t fly!!! We spent in the air 2 minutes and came back to the ground. We were very scared, and tired and frustrated, because we started to fly again by the same airplane (they fixed it) but anyway we were afraid. We lost our tickets to train (we couldn’t arrive on time to train station because of our flights). But anyway we have a lot of good memories about this country)))
This month we were participating in another event in Napoli. We were promoting EVS volunteering and activities of our organization on the square in Napoli also with another organizations. We were talking with youth about EVS. And I did good volunteering job – I became a blood donor on the square. So, this month I knew a lot about another countries, made something good and felt a lot of differen 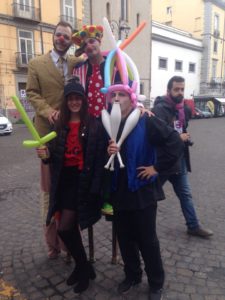 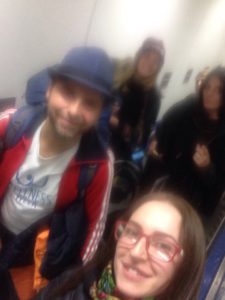 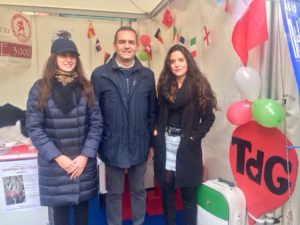